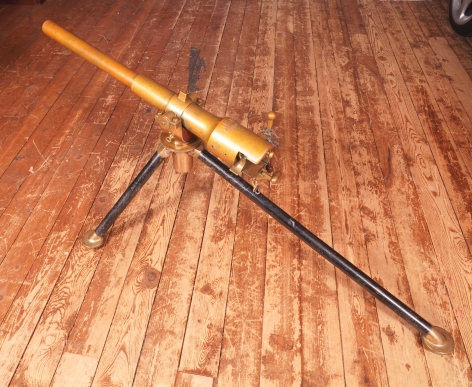 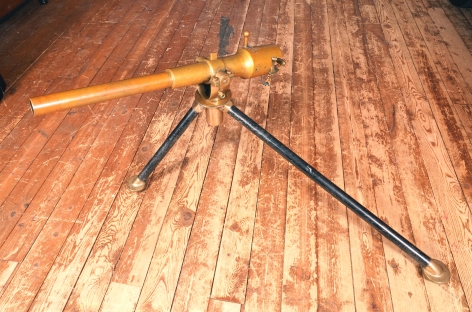 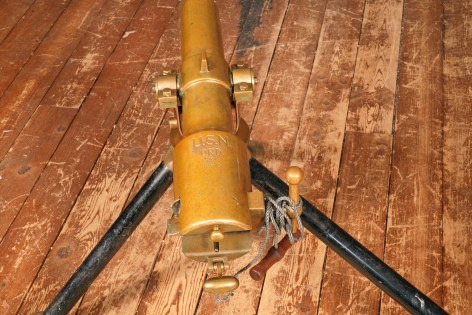 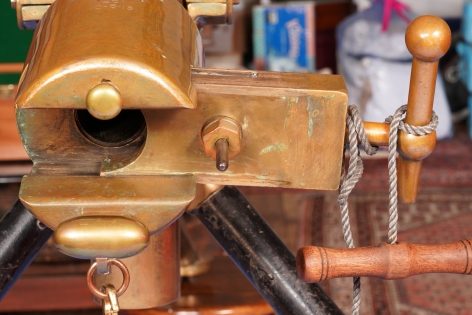 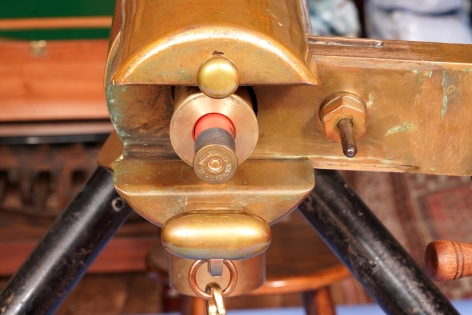 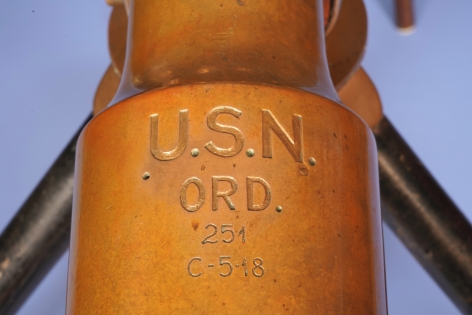 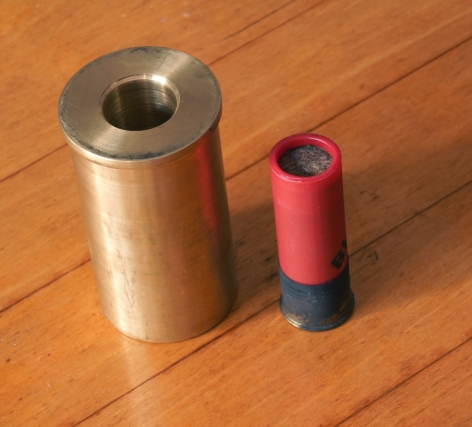 Brass USA Navy signal cannon American circa 1895. The barrel is all brass and has a raised band at the trunnions with a sight mounted at its top. The barrel swells at the breach and has the deeply engraved lettering “U.S>N>, ORD.. 251, C-5 18”. There is a rotating brass handle attached to the sliding breach block. The handle is used to slide the breach into the block and then the handle is rotated 90 degrees which locks it into place lining up the firing pin to the shell inside the barrel. A brass fitting attached to the bottom of the breach holds a rounded hammer. A cord is attached to the hammer so that when pulled the hammer swings up and strikes the round steel firing pin which in turn strikes the back of the shell and the cannon fires. To remove the spent shell the breach handle is unlocked by rotating the handle and the breach block can be slid back automatically releasing the shell. The cannon retains the original trunnion caps and bots.  The bottom of the trunnions is a brass yoke with a heavy brass cylinder which drops into a hole in the brass fitting at the top of the tripod base. The cannon retains its original brass and steel collapsible tripod. There is a brass plate at the top of which has three fittings that hold the three legs into position. The legs pivot and can be folded together making it easier to store and transport. The legs are made of steel and have the original black paint. At the bottom of the legs are brass feet. The cannon has a new 10-gauge shell reducer so that it can fire commercially available 10GA shells. This cannon was built specifically as a signal cannon as was built to fire blank shells. These cannons are quite rare and this is the only example we have seen in 40 years of business.
Condition: The cannon and tripod are in excellent working condition and have a untouched original surface and mellow patina. The swing hammer has been replaced and the cannon is in working order and comes with a ramrod style cleaning rod.
Provenance: Jack Warner a pioneer collector and appreciator of American Art, he was awarded the Frederic Edwin Church award in 2010 for assembling one of the greatest private collections of American art, including hundreds of paintings, furniture, and decorative art objects representing masterpieces of American art from the 18th century through the early decades of the 20th century. His achievement was also recognized in 2011 by the naming of the newly opened Jack and Susan Warner Hudson River Gallery in the Metropolitan Museum of American Art in New York.  His remarkable collection of highly significant American paintings, neoclassical furniture, sculpture and decorative arts was displayed and operated by his Foundation in the Westervelt Warner Museum of American Art from 2002 until 2011 where it attracted thousands of visitors to Tuscaloosa each year and enhanced the educational opportunities for children and the community.   His art included works by Thomas Cole, Frederic Church, Albert Bierstadt, Asher B. Durand, John Singer Sargent, Mary Cassatt, William Merritt Chase, Edward Hopper, Winslow Homer, Andrew Wyeth and many others. Jack Warner was also an enthusiastic collector of nautical antiques. In 1978 he created The North River Yacht Club and many of his fine nautical antiques were exhibited at the Club House.
Dimensions: Total length including tripod base 67 1/2, Length of barrel 38 3/4, Barrel diameter 2 3/8, Bore 1 3/4, width at breach 4 3/4,
Width of breach with block on the inside position 9", Width of with block in the out postion 11, Height to top of sight at center of trunions 23, Inches