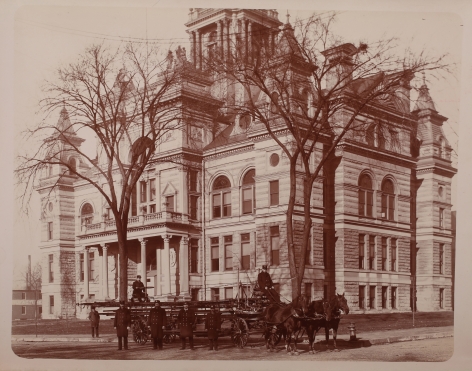 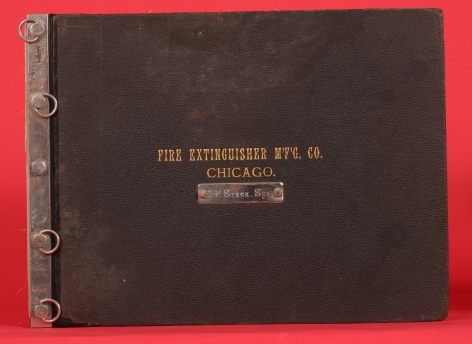 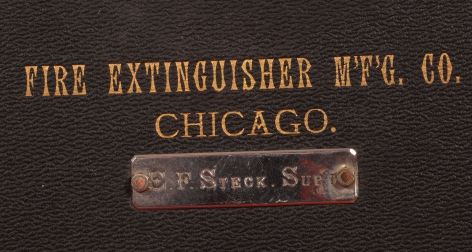 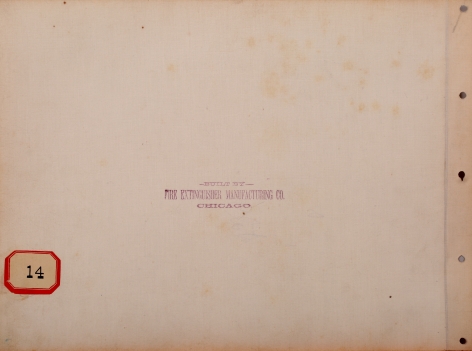 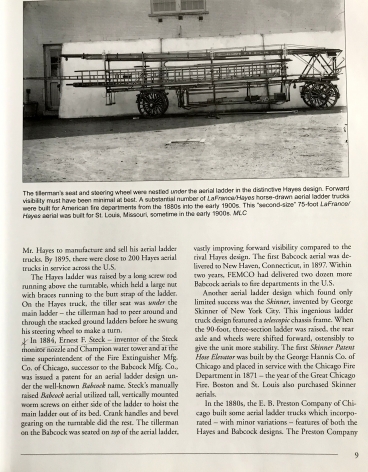 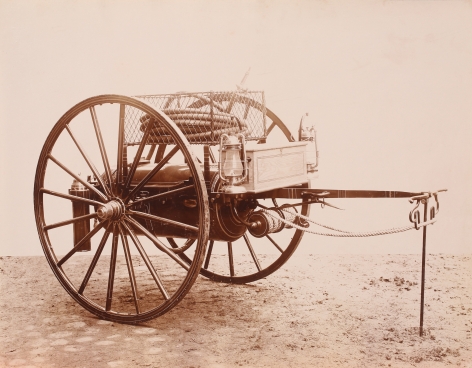 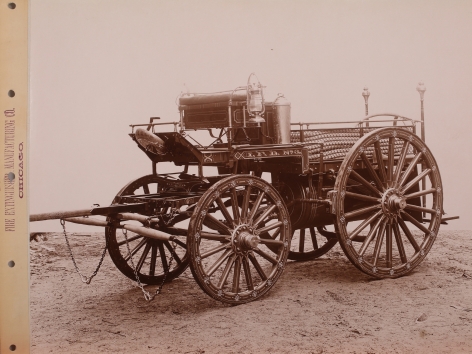 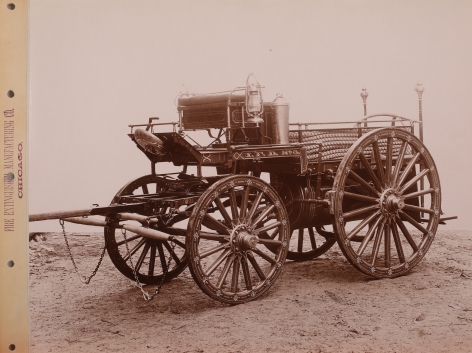 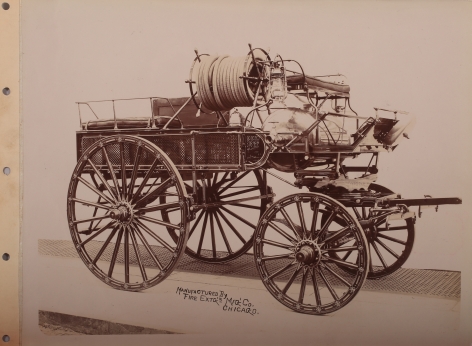 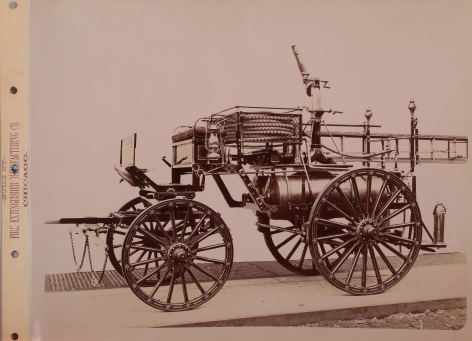 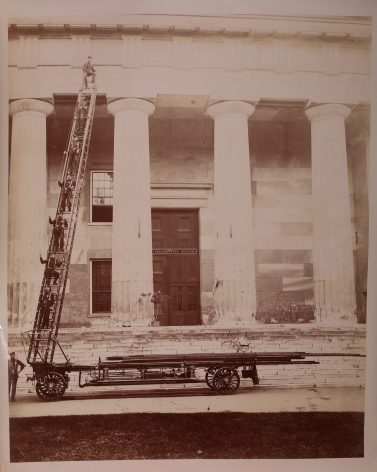 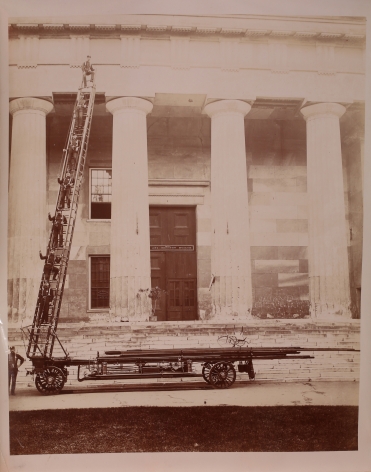 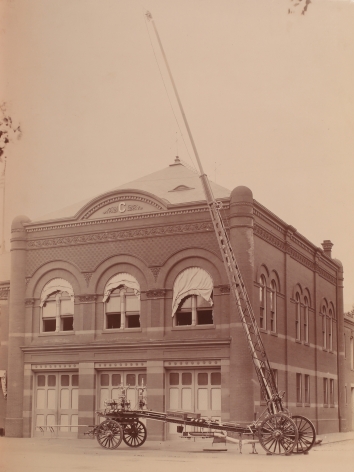 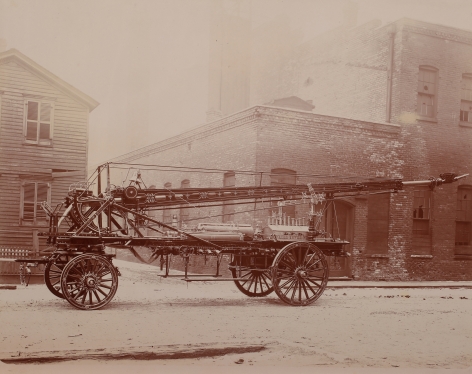 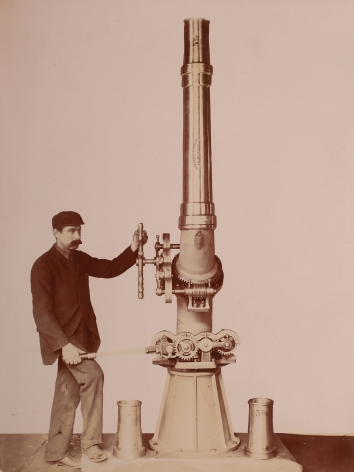 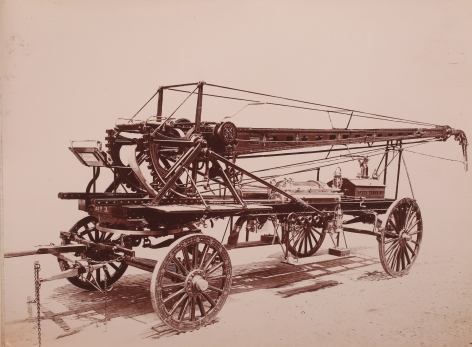 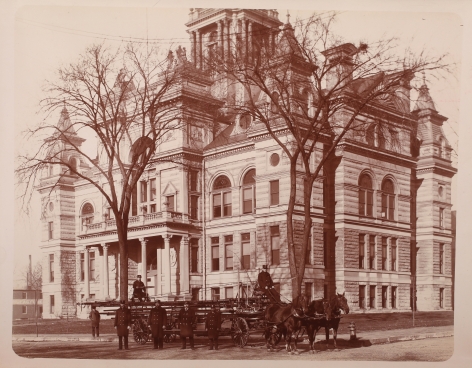 A wonderful and exhaustive photographic trade catalog from the Fire Extinguisher Manufacturing Co. of Chicago documenting firefighting equipment used during the waning days of the horse-drawn firetruck-era, showing various fire pumps, hook and ladder trucks, fire extinguishers, fire grenades, water nozzles, and two blue prints at the rear revealing the inner workings of a carbonic acid chemical engine pump and extinguisher. The company, which formed after it was initially locked out of a license to produce chemical engine fire apparatuses, but cleverly discovered and then purchase, a quarter interest in the technology from the heirs of a forgotten partial patent holder. The newly formed parent company - Fire Extinguisher Manufacturing Co. - was composed of a number of subsidiaries, such as the Northampton Fire Extinguisher Co. of Northampton, Massachusetts, the Protective Annihilator Co. of New York, and the North American Fire Annihilator Co. of Philadelphia.
The original cloth cover of the album has a gold lettered title stating "FIRE EXTINGUISER M'F'G. CO. CHICAGO. and has a small polished metal plaque "E. F. Steck Sept", who was the superintendent of the company. with a “No.1” written on the inside front board with blue grease pencil is the entry "No.1". The album includes 129 albumen or early silver bromide original photographs and 3 blue prints. This album is probably a unique prototype designed to hold all of the original photographs taken of the company’s inventory. It would be impractical and to expensive to have a catalogue of original photographs rather than printed reproductions. The cover can be removed by unscrewing the stainless clips allowing one to add, remove or change the order of the photographs. Included are images from an array of trucks (sometimes several views of the same apparatus) used by fire companies all across the country including Massachusetts, Pennsylvania, New York, Chicago, Los Angeles, and Oregon. The majority of the images show unmanned trucks and apparatuses from various angles, sometimes photographed on the street with the station in the background but more often against a white canvas background, as revealed in one image. Scattered throughout the album are more than a dozen images of firefighters with equipment to show scale or by trucks, some with their ladders extended to show the heights that can be reach; one image depicts nine men posed on a ladder reaching to the top of a five-story building. There are a handful of action shots with firefighters in uniform and on trucks shooting water at smoldering buildings. A few images capture civilians, usually on the periphery or looking out windows, as the trucks were being photographed. Most of the images are uncredited but there are about a half dozen images with photographers’ stamps on the back. The photographs are of a large size and given the sharpness were probably taken with a 11 x 14 view camera and the images are probably contact prints rather than enlargements. Given the sharpness of the photgraphs, the images can be magnifed with a glass so the minute details can become visible as well as the handwritten text which was painted on the equipment. Most of the photographs have rich tones but some show fading. There are 3 photos that are loose and not bound in because the album became full as thay added as many images as it can hold. (MI-816)
A remarkably complete and exhaustive trade catalog of turn-of-the-century firefighting equipment.
Photo Inventory:
1. The first 80 photographs have white labels with red borders on the reverse. Each label has a printed number ranging from 1-80.
2. The following 27 photographs that are not numbered but are titled and listed by the manufactures Style types. There are 13 styles and there are between 1 to 3 photographs of each of these style types.
3. There are 20 photographs with blank labels featuring a variety of apparatus types.
4. The last 2 photos have no labels and depict fire extinguisher products.
Reference: "The Evolution of Aerial Fire Apparatus" by Walter M.P. McCall, Publshed by Icongrafix, Hudson Wisconsin: 2009 page 9. "In 1884, Ernst F. Steck - inventor of the Steck monitor nozzle and Champion water tower and at the same time superintendent of the Fire Extinguisher Mfg. Co. of Chicago, successor to the Babcock Mfg. Co., was issued a patent for an aerial ladder design under the well known Babcock name. Given this background and expertise it is not surprising that this unique photo album was assembled and was under the ownership of E.F. Steck.
Condition: The Album Boards have been re-attached and one set of metal binder hardware has been replaced. The front and rear boards our orginal and show age with a few minor imperfections. A few of the photos are faded however most have deep rich tones.
Dimensions of Binding: Width 15 ½, Height 11 ½, Thickness 2 ½ inches
Dimensions of Photographs: Width 13 ¾, Height 11inches