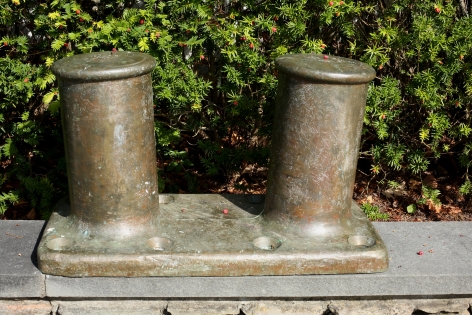 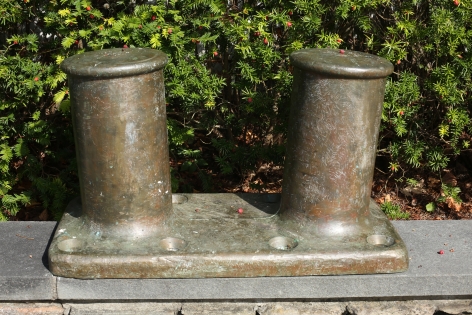 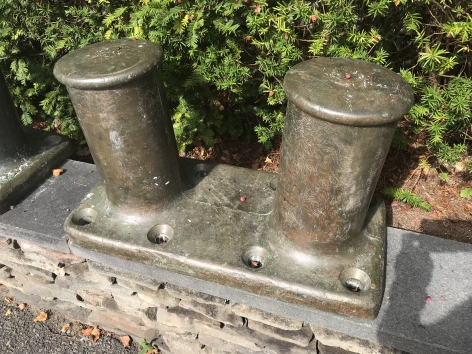 Pair of large and heavy brass bollards with brass bases with rounded corners. There are four bolt holes on each side of each base. The bollards have a pair of heavy brass cylinder shapes with a round cap at the top which is a few inches wider in diameter than the cylinder. Each bollard weighs about 250 pounds. (MI-830)
Note:  Most bollards this size are made of iron. Brass examples are rare.
Dimensions: 18"h x 31"w x 15"d
Provenance: These bollards came from the collection of Jack Warner and were located in his private Yacht club called The North River yacht club. Jack Warner a pioneer collector and appreciator of American Art, he was awarded the Frederic Edwin Church award in 2010 for assembling one of the greatest private collections of American art, including hundreds of paintings, furniture, and decorative art objects representing masterpieces of American art from the 18th century through the early decades of the 20th century. His achievement was also recognized in 2011 by the naming of the newly opened Jack and Susan Warner Hudson River Gallery in the Metropolitan Museum of American Art in New York.  His remarkable collection of highly significant American paintings, neoclassical furniture, sculpture and decorative arts was displayed and operated by his Foundation in the Westervelt Warner Museum of American Art from 2002 until 2011 where it attracted thousands of visitors to Tuscaloosa each year and enhanced the educational opportunities Large double brass bollards probably American 20th Century. The bollards have rectangular bases with rounded for children and the community.   His art included works by Thomas Cole, Frederic Church, Albert Bierstadt, Asher B. Durand, John Singer Sargent, Mary Cassatt, William Merritt Chase, Edward Hopper, Winslow Homer, Andrew Wyeth and many others. Jack Warner was also a enthusiastic collector of nautical antiques. In 1978 he created The North River Yacht Club and many of his fine nautical antiques were exhibited at the Club House.