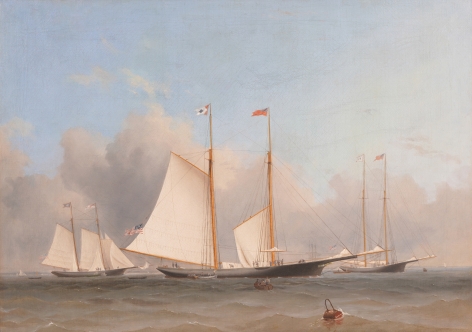 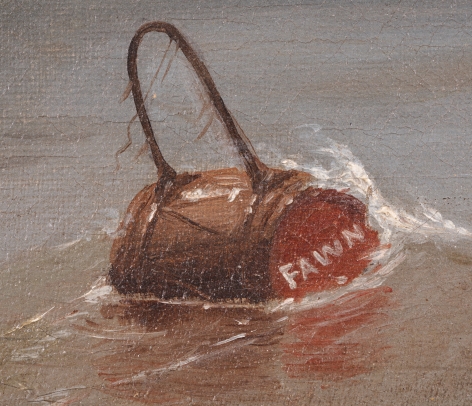 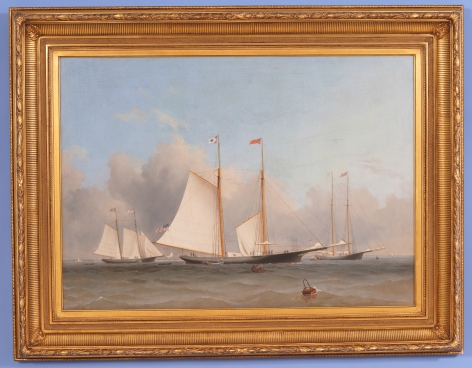 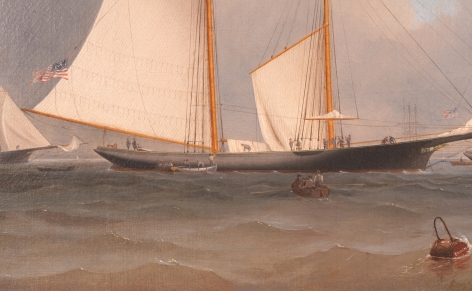 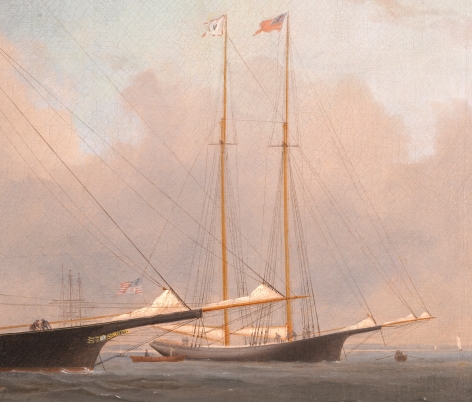 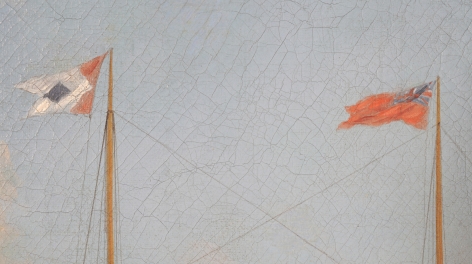 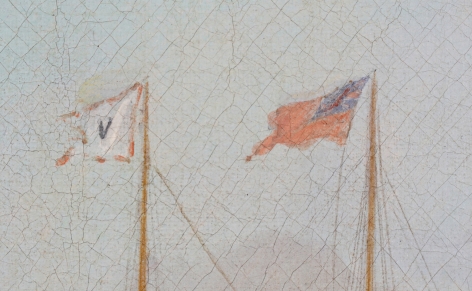 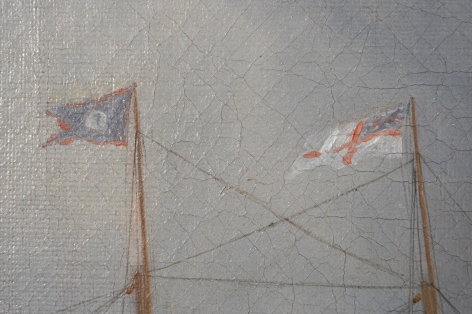 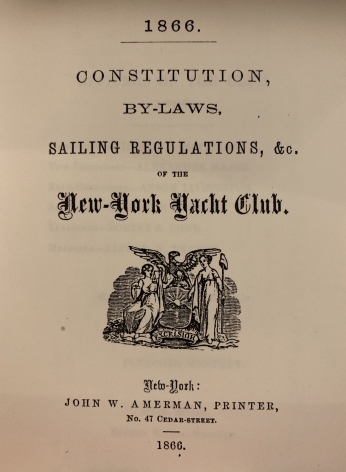 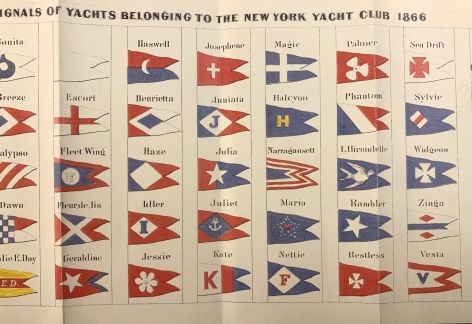 Oil on canvas, depicting the three American Yachts fallowing the completion of the Great Ocean Race of 1866, circa 1867 attributed Charles Gregory of Cowes. At the center is a starboard broadside view of the yacht “Henrietta”, winner of the race. “Henrietta” has a well-proportioned black painted hull that is artistically highlighted from the foremast back to the stern. There is a colorful figurehead and tailboard detail at the bow.  There are several crew members gathered around the base of the foremast lowering the gaff while another crew member is furling the sail on the boom.  There are two rowboats pulled up to Henrietta and a third one approaching with several colorfully dressed figures. To the left, somewhat in the rear, is an image of the yacht George Osgood owner of the “Fleetwing” apparently coming into port and dropping her sails. One can see her square sail hanging from a yardarm attached to the foremast. There are two small boats pulling up to her and it appears as she is taking on guests. To the right at anchor is the yacht “Vesta” the yacht that finished last and belonged to Pierre Lorillard. There are several crew members scattered around the deck and there is a dory pulled up to her stern. All three yachts are flying the American yacht ensign with an anchor surrounded by stars in the canton. All three American flags are flying from a line off the gaff. The “Vesta” and the “Henrietta” are flying the red duster flag (British flag) from the top of the foremast and the “Fleetwing” for some reason is flying the white ensign usually only flown by members of the Royal Yacht Squadron and the Royal Navy. The artist is very capable in his ability to show depth. The way the three yachts are positioned and sized helps bring the viewer into an almost 3D scene. In the right foreground is a barrel which is probably a navigational marker with the name “FAWN” painted on the front in white. Above the “Henrietta's” bow are three masts from a ship that is anchored in the distance. The effect of the barrel and the three masted ship is a technique used by the artist to create a sense of depth in the painting. The water is beautifully painted and has a very realistic appearance with a blend of blues, greens and grays with white highlights. The sky is a bright blue with puffy clouds rising from the horizon. This painting has significant historical importance and may be the only painting known to show the three American yachts in Cowes harbor immediately following the Great Ocean Race of 1866. (PA-1002)

Provenance: The Collection of the estate of Edie and Bruce Smart, Upperville Virgina.

Historical Background: One of the most important and well know of all yacht races is referred to as the Great Ocean Race of 1866. The idea for the race was generated when Pierre Lorillard and George Osgood became boastful about how fast and seaworthy their boats were.  After several cocktails at the Union Club, one of New York City’s most famous and oldest Clubs, the men then agreed to compete in a race from New York Harbor to Cowes England home of the Royal Yacht Squadron and where Osbourne Castle the summer home of The Queen is located.  These gentlemen agreed to wager $30,000. each.  Shortly after James Gordon Bennett Jr. at the age of 25, the oldest of the three participants, agreed to enter the bet making it a three-boat race and increasing the purse to $90,000.  Each of the schooner yachts flew from the top of their mast their colorful private signal flags for identification purposes. Henrietta flew a red, white and blue flag and was owned by James Gordon Bennett Jr. whose father owned the New York Herald the largest newspaper in America. Henrietta was built by Henry Steers in Greenport Long Island. Henrietta was lengthened 15 feet in 1865 by Bennett before the race. She was 205 tons and won first place arriving on Christmas evening in 13 days and 22 hours. Fleetwing flew a blue flag with red border and the letter “F” in the center of a white ball and was the private signal of her owner George Osgood who made his fortune as a financier. Fleetwing was 212 tons and her race time was 14 days 6 hours finishing in second place. Vesta 201 tons flew a white flag with a red border and the letter “V” and was owed by Pierre Lorillard whose family built a fortune in the tobacco business. In the front of the NYYC Yearbook for the year 1866 are foldout pages illustrating all of the members private signal flags. These private signals were printed in color with the corresponding boat name printed above the image of the flag, thus verifying the identity of the three yachts described here. Vesta came in last finishing only an hour after Fleetwing. The only owner who actually sailed his boat in the race was Bennett while the others traveled to England by steamship. Just fallowing the start the yachts passed the Sandy Hook Light Ship off the coast of New Jersey on December 11, 1866 and arrived in England off the Needles on the lsle of Wight at 5:45 PM, December 25th. The yachtsman experienced some foul weather during the journey causing huge problems and delays for all the boats in a storm on December 19. While experiencing gale force winds Fleetwing was stuck by a huge wave sweeping six men into the sea never to be recovered. The race had captured international attention and James Gordon Bennett was the recipient of the $90,000 purse. The yachtsman and their officers were invited to attend a banquet at the Royal Yacht Squadron and in attendance was Queen Victoria and Price Albert, who were the same members of the Royal Family

that were present fifteen years before when they witnessed Yacht America beating the English fleet and taking home what became known as the America’s Cup. The Great Ocean Race was the subject of many news articles on both sides of the Atlantic. The race was also the subject for many artists in including James E Buttersworth who painted many versions of the beginning of the race with the yachts passing Sandy Hook Light Ship and a few of paintings showing the yachts underway crossing the Atlantic. Additionally, there were paintings of the individual contestants arriving off the English shore. The race was also a popular subject for print makers whose prints were published and widely distributed by various printmakers including Currier and Ives. There were several large and small folio sized prints that were created illustrating the yachts and the race. The only other image we have located showing all three yachts together having completed the race is a Currier and Ives print titled “The American yachts Saluting her Majesty, Queen Victoria off Osborne House, Isle of Wight. This print was published in the “Illustrated London News” on Jan. 14th 1867. The only other image of the arrival of the three yachts

at Cowes is well known wool work picture of the period with the title in gold along the bottom border stating “The Yachts Saluting, Her Majesty of. Osborne.” Bennett was born on May 10th 1841 in New York City. At the age 16 years and a few months Bennett became the youngest person ever to become a member of the NYYC. He was also the youngest member of the NYYC to become commodore and in 1871-1874 he became the 7th commodore of the Club. Bennett was the only member ever to become commodore twice and in 1884-1885, Bennett served his second term as the 13th commodore of the Club.

Reference 1: “Yachts on Canvas: Artists’ Images of Yachts from the Seventeenth Century to the Present Day” by James Taylor, Published by Knickerbocker Press New York, N.Y. 1998, Page 58. “Charles Gregory lived in Cowes, and was therefore well placed to paint yachting subjects for club members. His son George (1849-1938) was also a marine painter working chiefly on the Isle of Wight. Both artists painted yacht portraits and races often with the Royal Yacht Squadron as a backdrop. There are several fine examples of their work in the British Royal Collection. This page illustrates a painting belonging to the Royal Yacht Squadron depicting the topsail schooner “Erminia” sailing in Cowes with the “RYS” featured at the shore. Of special note a very similar barrel buoy or harbor marker with rope like handle appears in the lower left corner of the painting as it does in the painting described above.

Reference 2: “Making Waves” A History of the Royal Yacht squadron 1815-2015 by Alex Martin, Published by Unicorn Publishing Group, London, 2015. There is a color illustration of the schooner yacht “Palitine” 1878 belonging to the Commodore of the RYS the Earl of Wilton painted by Charles Gregory. This painting shows a very similar color palate and attention to detail as well as the treatment of the water and sky compared to the painting described above.

Reference 4: “Making Waves” A History of the Royal Yacht squadron 1815-2015 by Alex Martin. There is a color illustration of the schooner yacht “Palitine” 1878 belonging to the Commodore of the RYS the Earl of Wilton painted by Charles Gregory. This painting shows a very similar color palate and attention to detail as well as the treatment of the water and sky compared to the painting described above.

Reference 6: "An Introduction to Yachting" by L. Francis Herreshoff, Published by Sheridan House 1963 Pages 66-67. This book presents a clear and detailed summary of the race.

Condition: The painting is in fine condition. The painting was recently cleaned and lined by Yost Restoration. There is a small amount of scattered in paint in the sky and the painting retains all of its splendid detail and rich color.