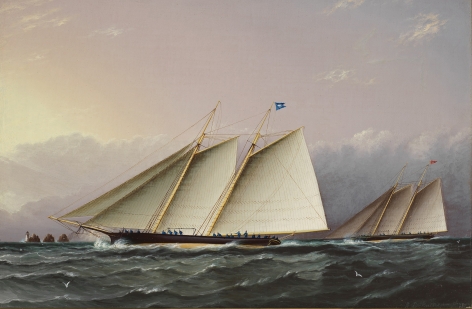 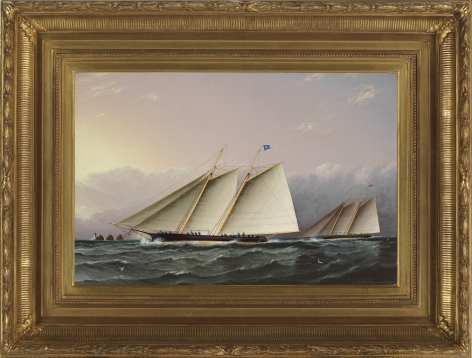 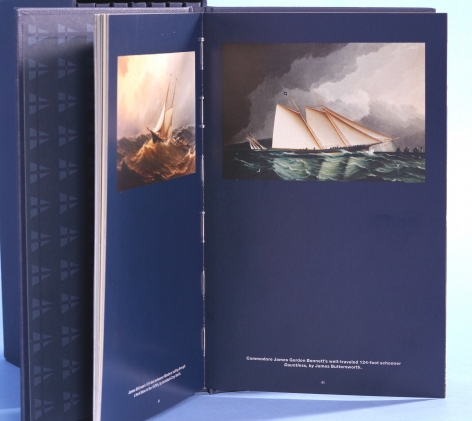 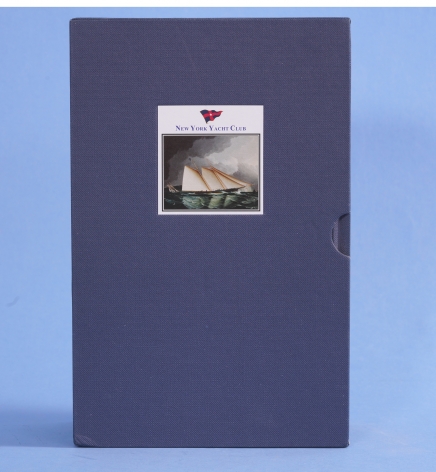 Oil on canvas, titled “Yacht Dauntless Racing off the Needles in the 1872 International Race by JE Buttersworth” signed in light blue paint, lower right "JE Buttersworth." The painting depicts the legendary schooner Yacht Dauntless in a stiff breeze with shortened main sails and no top sails leading another schooner yacht as they approach the Needles off of Cowes, circa 1872. The name Dauntless is painted in fine letters on the transom giving positive identification to the yacht. Both schooners are painted in excellent detail and the sail seams and reef points are all very finely painted. The decks of both yachts are filled with sailors in blue uniforms busily handling lines and sailing the boats. The Dauntless is flying a blue flag and the second yacht is flying a red flag. To the left are the three famous rock formations with the lighthouse at the outermost point. These rock formations are just off the shore are known as the Needles. The water is well painted and features white caps along the top edge of the waves. The sky has a very luminescent glow and has wonderful and bright color. (PA1017)
Dimensions of Painting: Height 13, Width 18 inches
Dimensions of Frame: Height 20, Width 26 1/4 inches
Provenance: Harvey Marwick Fleming, New York, 1902
Donald and Elizabeth Sherbondy, Mt. Lebanon, Pennsylvania by decent from the above, 1965.
Private Collection, by decent from the above, 1999
Quester Maritime Gallery to private collector in Maine
Condition: The painting is in excellent condition and was restored by Yost Restoration in 1999. The Yost condition report is available to the buyer.
Reference I: “Traditions & Memories of American Yachting “ by William P. Stephens published by International Marine Publishing Company Camden,Maine 1981, p. 15. The chart titled “Early Transatlantic Passages Of American Yachts”  lists that in 1872 James Gordon Bennett Jr. raced Sappho with W.P. Douglass from New York to Cowes, England.
Reference II: “The Club House at Sea” by John Rousmaniere, Volume 1, p. 41. This book is part of a set of eight books dealing with the history of the NYYC released in conjunction with the Club’s 175 anniversary. This NYYC painting is illustrated full page in this book. The publishers selected the Club’s Dauntless painting to be featured by applying a color picture of the painting to the front of the box cover which houses the set.
Note: The depiction of the Yacht Dauntless racing off the Needles in Cowes in the painting described above and in the NYYC version both show Dauntless flying a blue flag with a white square at the center from the top of her main mast.