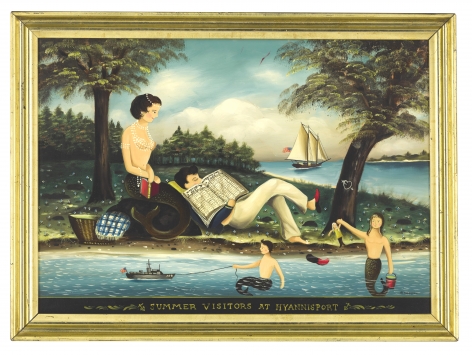 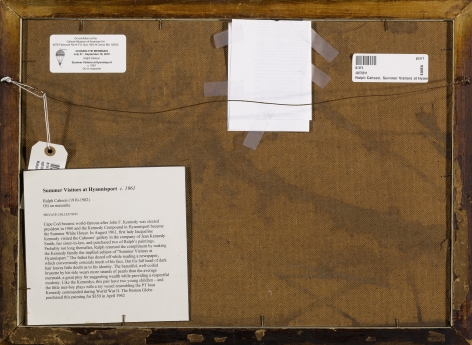 Oil on Masonite painting titled at bottom of painting “SUMMER VISITORS AT HYANNISPORT (PRESIDENT JOHN F. KENNEDY AND FAMILY) and signed R. Cahoon lower right circa 1962. The painting depicts the presient laying on the beach reading the Washington Times with Jackie as a mermaid is behind him with a picnic basket. John John and Caroline are playing in the water. (PA-1020)
Cotuit, Massachusetts, Cahoon Museum of American Art, Chasing the Mermaids, July 27 - September 19, 2010.
Dimensions of Painting: Height 16, Width 22 1/4, Inches
Dimensions of Frame: Height 18 1/2, Width 25, Inches

Note: When a young John F. Kennedy was elected President of the United States in 1960 and images of his charming family vacationing at the Kennedy Compound in Hyannis Port proliferated through media coverage, the allure and appeal of Cape Cod and its activities proportionately increased and the popularity of local artists, Ralph and Mary Cahoon, soared. In August 1961, first lady Jacqueline Kennedy visited the Cahoons’ studio with her sister-in-law, Jean Kennedy Smith. Both Jackie and Jean purchased two of Ralph’s paintings each. A great admirer of the Kennedys and inspired by the visit, Ralph shortly thereafter made the Kennedys the implied subject of Summer Visitors at Hyannisport. The dark-haired father, widely accepted to represent John F. Kennedy, dozes off while reading an issue of the Washington Post with a string tied around his big toe symbolizing his marriage to Jackie as she, portrayed as a mermaid, gazes at him adoringly, wearing more than the usual number of pearl necklaces – a clever ploy for insinuating wealth as well as modesty. John-John and Caroline, represented by the mer-boy and girl that play in the water, are depicted tugging a toy model of the PT-109 boat that his father commanded during World-War II and she with doll and bucket in hand. The family’s yacht flying the American flag is seen moored in the background.